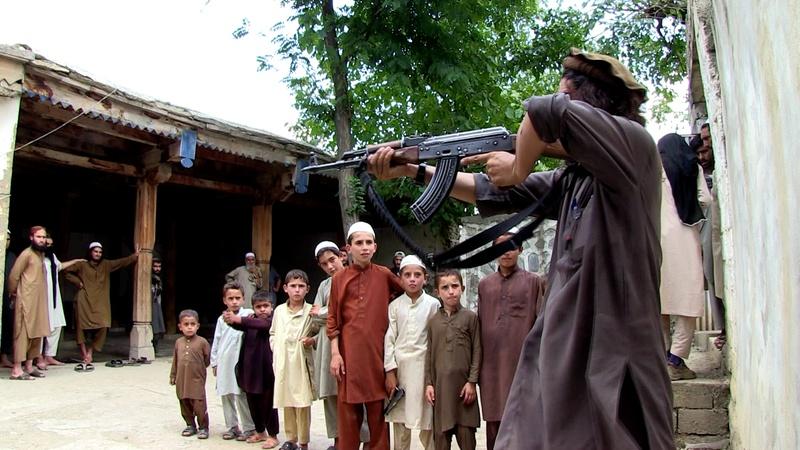 ISIS is on the rise in Afghanistan, and they say they're enlisting children in jihad.

PBS NewsHour: What's Made the Islamic State One of the Richest Terrorist Armies in History?

FRONTLINE: The Rise of ISIS

An investigation of the miscalculations and mistakes behind the brutal rise of ISIS.

PBS NewsHour: How the Paris Attacks May Affect the U.S.-Led War on ISIS

Anthony Cordesman on how the Paris attacks may affect the U.S.-led fight against ISIS

PBS NewsHour: How ISIS Makes More Than a Million Dollars a Day

The Financial Times's Erika Solomon discusses how ISIS makes millions for its military.

Gripping, first-hand accounts of women who escaped the brutal reign of ISIS.

French President François Hollande said the wave of simultaneous attacks that recently hit Paris — killing at least 129 people in the worst act of terror Europe has seen since the 2004 Madrid bombings — was orchestrated by the Islamic State militant group and constituted an “act of war.”   Get the latest on the attacks and learn more about ISIS with a collection of news documentaries and articles from our PBS producing partners.

We have a roundup of articles that delve into the militants’ core beliefs and tactics.

Abdelhamid Abaaoud, the Belgian suspect behind the Paris attacks, died in a police raid Wednesday.

Why the Islamic State Hates France

The Islamic State is both a totalitarian proto-state that controls territory, as well as a global terrorist organization.

House Gets Enough Votes to Curb Syrian Refugees to Overri...

The House passed a Republican-backed measure to stifle the flow of Syrian and Iraqi refugees, attracting enough votes to override President Barack’s threat of a veto.

What is the Islamic State?

The self-proclaimed Islamic State is a militant movement that has conquered territory in western Iraq and eastern Syria.

Here's Why the Islamic State Group Has so Many Names

How do the names differ in meaning? And who’s saying what? Here’s a breakdown.

Hitting ISIS Where It Hurts By Striking Oil Trucks

The U.S. military says it launched an attack this week that hit the Islamic State right where it hurt.

Has The Islamic State Overreached?

ISIS has lost about 25 percent of its territory in the past year and is feeling increased pressure from opponents that include the U.S., France, Russia and Iran.

Music can provide a space for healing, feeling and thought. Following the terrorist attacks in Paris, we were compelled to play music with a meditative tone.

By The Numbers: The Paris Attacks And ISIS

Here's a look at some of the key figures in the Paris attack, as well as other numbers related to ISIS.

The Obama administration announced a new intelligence-sharing arrangement with France.

What Motivated the Terror Attacks in Paris?

Professor Peter Neumann of King’s College in London, who joins William Brangham from London with more.

President Barack Obama holds a news conference from the Group of 20 summit in Antalya, Turkey

Authorities launched an international search Sunday for a suspect wanted in connection with the attacks.

Everything We Know About the Multiple Attacks in Paris

The shooting rampages and suicide attacks began Friday night at a level of violence not seen in Paris since World War II.

ISIS in Afghanistan: School of Jihad

The school is run by fighters who pledged allegiance to ISIS.

In Solidarity With France, Tributes Spring up Across the ...

View photos of people around the world paying their respects after the attacks.

World leaders have increased vigilance in their own countries.

Searching for the Paris Attackers

Investigators work to determine the planners of the Paris attack.

Robert Gates on ISIS and Iraq

Former Secretary of Defense Robert Gates on the challenges of fighting ISIS in Iraq.

ISIS is using bulldozers and sledgehammers to destroy priceless antiquities in Iraq.

A pair of cyber-archaeologists are attempting to reconstruct ISIS-destroyed artifacts.

Why Are So Many Westerners Joining ISIS?

New scrutiny is being given to the threat posed by the growing number of Western fighters who have joined the ranks of the Sunni militant group.